When Mutant Mudds made its initial debut on the 3DS a while back, it showed Renegade Kid's savvy for developing a classic "12-bit" (not quite NES, not quite SNES) platformer with 3D effects that took advantage of the system's capabilities. After that, the game found new life on the Wii U with Mutant Mudds Deluxe, featuring additional "ghost" levels and a much higher resolution display for console play.

Outside of that, the game hasn't had a shot on other game platforms – till now. Renegade Kid recently released Mutant Mudds Deluxe for PS3 and PS Vita, complete with Cross-Buy support and all the content that was featured on the Wii U version of the game. If you're a fan of the classic platformers of old, you'll want to check these out.

In Mutant Mudds Deluxe, you play a kid who finds the world overrun with a bunch of nasty alien creatures known as, well, mutant Mudds. With a squirt gun in hand and a jetpack on his back, he sets out to destroy the evil Mudds and make the world peaceful again for him and his grandmother.

If you grew up in the classic game scene, then Mutant Mudds will be very familiar to you. The game utilizes old-school graphics and visuals, akin to the NES era, for level design and background music. On the PS3/Vita, the game has to forego actual 3D effects in favor of blurring out whatever playfield the kid was on, shifting the action to his current one. It's a neat effect, and, aside from a couple of the confusing later levels, it works fundamentally well. The level designs are sharp as well, especially the trickier "hidden levels." You'll have fun seeking these out.

The sound is marvelous. The music is programmed with NES love all over it, and is fun to listen to – especially the new "ghost" tunes that play in those stages. The sound effects are basic, but are applied where necessary to complete the package.

As for the gameplay, it's platforming bliss. Moving around from level to level is easy, and utilizing the jetpack helps you collect out-of-reach coins and get across large gaps. You'll still have to deal with enemies and occasionally get out of a tough spot to gain access to a secret level, but that's just part of the fun.

In addition to the levels from the original game, Mutant Mudds Deluxe features bonus "ghost" and "Grandma" levels that are worth taking on. Outside of that, though, there's very little replay value here. It would've been nice to have something to come back for, although playing through the game again is hardly something we'd call a burden. 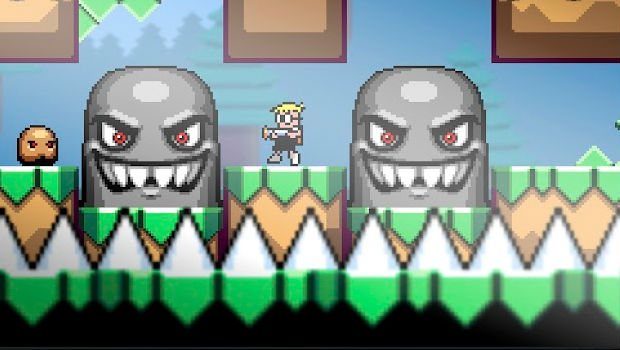 At $9.99 for both versions, Mutant Mudds Deluxe is quite a steal. Though not as long as other platformers on the market, it brings a heaping amount of retro joy to both systems, with tight gameplay and a presentation that knows just how to dial our nostalgic buttons. It only makes us hope that Renegade Kid returns with a sequel – and soon.