Pokemon Adventures: HeartGold And SoulSilver Worth Its Weight In Poke-Dollars 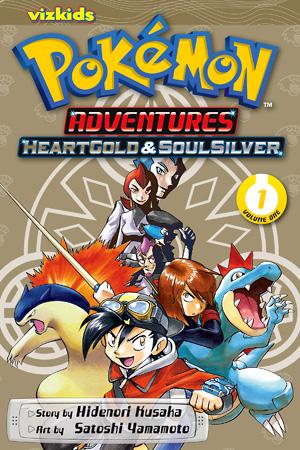 The Pokemon Adventures: HeartGold and SoulSilver (Vols 1 and 2) Manga tells the tale of Gold, Silver, and Crystal or “Crys” as they travel through the Johto region. Along the way they have to stop the reformation of Team Rocket and their devious plan to find and corrupt the mind of Arceus. The Manga plays off of the storyline from the Gold and Silver video games and more so from the updated HeartGold and SoulSilver video games. Pokemon fans will want to give this two volume saga a look. Even if you’re not a Pokemon fan, this will keep you glued to the pages!

Like I mentioned in the last Manga I reviewed, Genesect and the Legend Awakened, Viz Media treats the reader like a Manga novice and that’s ok. They give you a minor tutorial on how to actually read the book such as what order the panels should be read in or which way the book should be read. The book will bring fans back to the Johto region and in a time where nostalgia sells, fans of the Gold and Silver games will want to travel back to Johto. The start of the Manga gives you a brief recap of what has happened before and a minor introduction to the main characters. In this case, Gold and Silver have their storyline mentioned.

Without giving too much away from the story, Gold heads to the Pokeathlon Dome near Goldenrod City to meet Lance, the Dragon master and cousin of Blackthorn City gym leader, Clair. Lance never shows up and the stage is set for Gold to set out to find him and get him to talk about Arceus. The Manga takes the story in a darker direction as compared to the animated series in terms of writing.

There are several parts of the story that the animated series wouldn’t touch, such as Team Rocket being portrayed as evil again compared to the silliness of the animated series. Another example of this is when Silver’s Weavile has its claw on Petrel’s, one of the Team Rocket execs, throat to keep him quiet. It also has a more mature feel at times like when Silver tells the reader that Giovanni is his father. The illustrations follow the path of mature feeling with the character designs. Pokemon look tougher and people look easier to read, feelings wise. 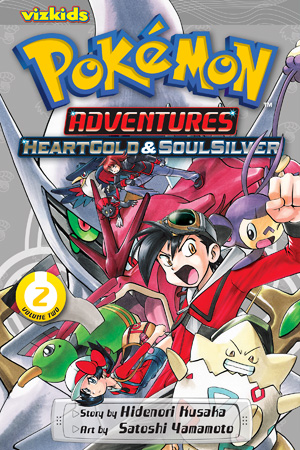 My sense of humor and the humor in the writing is one and the same. When Professor Oak is showing Gold pictures, he makes a smart-ass remark to Oak and that’s something I would do or at least make a joke. More often than not, it’s the subtle jokes that you don’t notice until you read them to yourself once or twice like the photo joke or Crys doesn’t want Gold to make fun of her outfit. Subtle jokes like the first season of the animated series is what makes the Manga have a different type of charm to it. Another example of the writing is where the world is in danger but Gold only cares about Jasmine, one of the Johto gym leaders because he has a little thing for her.