The Venture Bros. Season Five Blu-Ray Is A Must For Fans

It's pretty easy to be a fan of something like the Venture Brothers. Between its ridiculous plot lines, its great characters (BROCK!) and its fun pop-culture reference, it's the ideal take on old adventure series from the 60's. And as non-sensical as it gets at times, it's always got that wink in its eye, assuring you that it's still got your best interests in mind.

It's hard to believe it's been going for five seasons now, and, as subdued as the fifth season is, it's still one of the best shows around. Across eight short but sweet episodes, you'll find plenty of goings-on, from the return of the old SPHINX crew (sort of) to a hilarious visit to the island of Spanikopita, which is hardly what it seems. Dr. Venture, his sons and several characters are along for the ride, having fun every step of the way. Long live the Monarch!

Again, this season was sadly shortened, but at least each of the episodes have a fun, bouncy spirit to them, with plenty of in-jokes and moments that make you wonder, "Um, what?" while guffawing. For instance, you probably never expected a model of Han Solo in carbonite to show up on Spanikopita…but there it is. 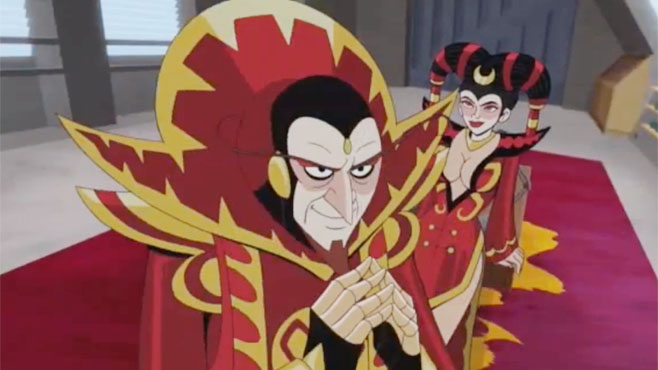 Kudos to Publick and Hammer for making the episodes uncensored as well. On TV, they're fun enough as they are, but here, Venture fans get plenty to soak in, as originally intended. Obviously that means it's not for kids, but come on, you probably saw that coming the minute the "Adult Swim" label flashed on the screen. Hello, adults?

Along with the eight main episodes, two bonus episodes are included – a joyous Halloween episode featuring a guest stint by J.K. Simmons (one of the best guest stars to date) and a humorous From the Ladle to the Grave side story. They help ease the pain of a prolonged season, a little bit anyway.

The video and audio treatment for Venture Bros. Season Five is rock solid, with good picture and sound for each episode. It's still a bit crudely animated compared to CG tales, but, hey, putting CG in Venture Bros. would be downright wrong anyway. I'm a fan of this style, and it works tremendously.

As for extras, there are audio commentaries with Publick and Hammer for each episode that are must-listens for fans, as they get swearing like drunken sailors and don't hold back. For good measure, the deleted scenes are worth a look, and the "Fax My Grandson" side bit is pretty funny.

There could've been more to this season of Venture Bros., but, honestly, it retains enough of its silliness and joy that we'll take whatever we can get. Season Five is right up there with the others, and highly recommended for fans who can't get enough of this stuff. Spanikopita!

Take Rick And Morty into VR!