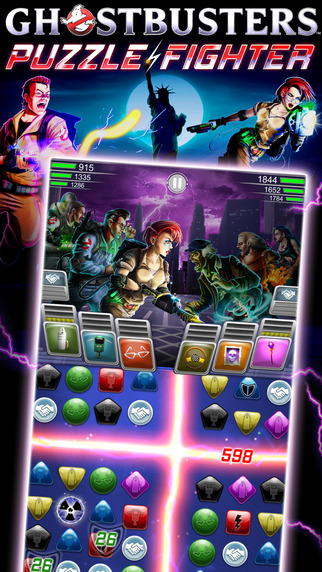 If you’re a fan of the Ghostbusters, then you’re in luck because I have the perfect game for you. This mobile game combines elements from role playing games, puzzle games, and strategy/fighting games into one neat little ecto-filled package. Throw in card game elements in you have most of the major gameplay elements covered! Let’s get right into the review because there is a lot to cover and remember not to cross the streams!

Right off the bat you can tell the game developers at Beeline did their Ghostbusters homework because there are characters from all over the Ghostbusters universe. You could see characters from the cartoon or from either film for example. Long story short, New York City is being overrun by ghouls and it’s up to you to put them in their place. Now what could be tough about that?

The game has multiple gameplay elements, such as card game/puzzle as I mentioned before. You’ll need to master all of them to make your way through the five episodes in the game, each more challenging than the last. The puzzle element is pretty straight-forward where you match up three or more icons to deal damage to the opposing ghosts that you come across in battle.

You fight by using three card teams and you can level up your cards by winning battles and earn in-game experience to spend. Winning a battle gives you the chance to unlock a reward that’s available for each mission. Winning a battle doesn’t guarantee that you’ll unlock the reward but win a few times and you should be able to get your hands on all the rewards.

The attack animations for Ghostbusters and the ghouls is very well done and is another way that Beeline took their time with this game. Special attacks get their animation and look great for a mobile game.

The main objective of Puzzle Fighter is to line-up three or more icons on the touch screen to activate attacks. The game will help you by showing you where a match is but doesn’t give you a lot of time to locate that match before blinking. You can take your time to locate that match but you should get more time to find the perfect match on your own!

I’m a sucker when it comes to great video game music and Puzzle Fighter is no different. This game has some of the best-sounding music I’ve heard for a mobile game. It sounds so good that you could mistake it for the movie soundtrack or someone watching the movie beside you. The game uses the official Ghostbusters music and who doesn’t love that theme, I know I do!

I do have some issues with the game, albeit minor and they don’t hinder the gameplay too much. The game has in-application purchases, which I have never been a fan of, has ways of achieving the purchased items/packs without actually buying them. You can win battles to win currency/character cards but I just have never been a fan of in-app purchases.

Another minor issue I have is that ghoul teams get too powerful too quickly in game. What I mean by that is the game isn’t too far along in the story mode and you coming up against high level ghoul teams and it takes just about everything you have to win/survive. That type of combat encourages level grinding/replays and that isn’t a bad thing. I think if the enemies are too tough too early, it might scare some people away.

It’s these reasons that I’m giving Ghostbusters Puzzle Fighter for mobile devices an 8/10, great looking and sounding with RPG/puzzle/card game elements that have in-app purchases and at times, unbalanced AI Ghoul teams to fight!

I ain’t afraid of no ghost!