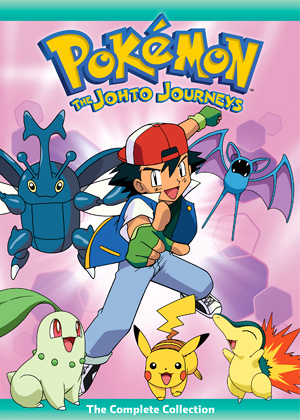 Fans of the Pokémon franchise that grew up with the series will tell you that the Gold and Silver games for the Game Boy Color were/are the best in the series. I happen to be in that corner that agrees with these fans. It also goes without saying that there was a corresponding anime series that went along with the Gold and Silver generation. I grew up with the Pokémon games as well as the anime and was waiting for the Johto Journeys to get a DVD release for quite some time! The DVD is the complete installment of the Johto Journeys anime just to clarify!

The Johto Journeys follow Ash, Misty, and Brock as they bring the GS ball to Kurt, the Poké-ball expert, in Azalea Town. The gang received the GS ball in the Orange Islands and brought it to Professor Oak but he couldn’t solve the mystery surrounding it.

Along the way Ash decides to register for the Johto League and continue his goal of becoming a Pokémon master. The likes of Chikorita, Cyndaquil, and Totodile join Ash on his journey through the Johto region. In the DVD, you’ll see Ash take on the Violet City Gym and the Azalea Town Gym but the question becomes will Ash have what it takes to win a gym badge let alone two?

It wouldn’t be an anime if it didn’t have filler episodes and Pokémon is no different. The Johto Journeys series, in my opinion, has quite a few filler episodes and they slow the flow of the series down. It took way too many episodes between the Violet City Gym and the Azalea Town Gym. I understand that Ash needs to catch Pokémon and new generation Pokémon need to be introduced into the series but it just slows things down.

The DVD is pretty straightforward where you can watch the full episode or half of the episode. You can also see the full intro theme and ending theme on each episode. It also has the Pokémon Karaokémon songs at the end of each episode. For those who don’t know, the Poke-Karaoke is a Pokémon-themed song and was the Johto generation’s answer to the Poke-rap. I miss the Poke-rap but there are way too many Pokémon now to bring it back, it would take too long. My favorite Karaokémon is the one where Brock is singing his love for Officer Jenny and Nurse Joy. How can you not enjoy Brock?

I’m giving the Pokémon: The Johto Journeys DVD an 8.5/10. I have been waiting for this release for quite some time but the lack of special features doesn’t help the DVD.