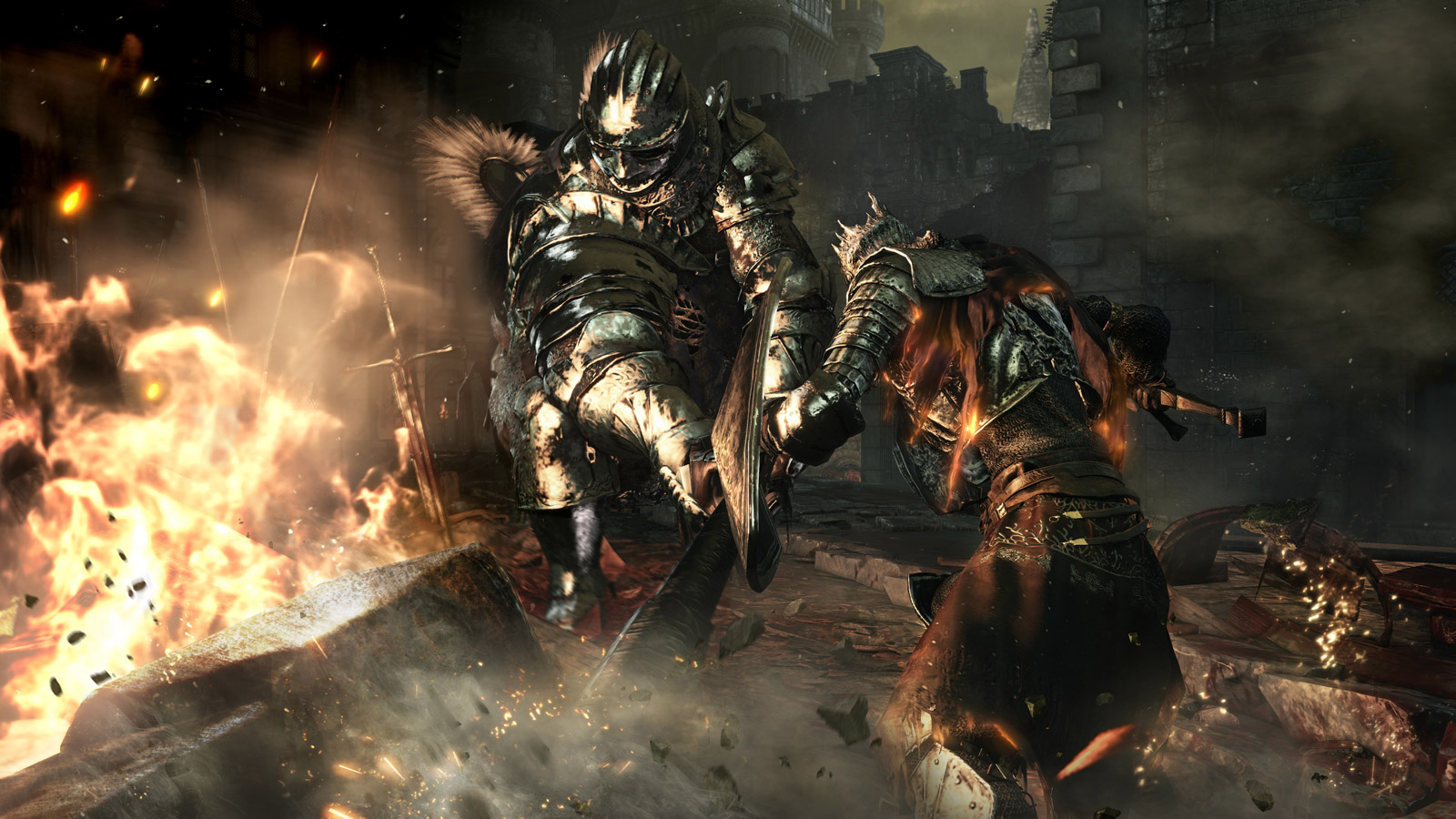 Bandai Namco will release its gem, Dark Souls III, in the middle of April. I was able to get my hands on a copy of the game to review. I was also able to play versions of it when it when Bandai Namco showed it off at different events. Let's get right into it since there is a lot to cover!

Dark Souls III is an Action RPG that will release for the PlayStation 4, Xbox One, and on Steam on April 12th. Right off the bat, Dark Souls III throws you into the action but it also does it without overwhelming you.

The player walks along the path and there are points along said path where you can get control hints and attack hints. This is a good way for vets of the series to get their refresher on controls and for newcomers to learn them for the first time. In this era of gaming, players don’t like having their hand held or having things giving to them easily and they won’t have to worry about things being given to them easily in Dark Souls III.

Dark Souls III looks gorgeous, graphically and has a soundtrack to match. There were times while playing that I thought I was watching a movie. The soundtracks for the boss battles sound like a big budget movie production. The landscapes and locations look like they’re right out of the middle ages and what I mean by that is castles and catacombs, things like that.

As I mentioned, Dark Souls III has a great soundtrack that adds to the gameplay. Boss fights have unique scores that build on the momentum and thrill of the fight. The boss battles are really tough and will get you frustrated for most of the battles. The game is really challenging but that’s what the Dark Souls series is known for, being  “oh-my-god” tough that will make you want to throw something through your television while playing.

Customization and Role Playing are two features of the game that are prevalent. You can decide what part of the stage you want to traverse next. It might not be the right way or you might hit a dead-end but you’ll never know unless you try and go that way. The world is interconnected and you will feel compelled to explore the areas because you never know what’s in each location.

There are various weapons to use and find while you’re on your quest. From a long sword to throwing daggers to everything in-between can be used for attacking. You’ll be able to upgrade your character and weapons in Firelink Shrine by gathering souls/experience pts and trading them for goods. If you want to be the best/strongest, you’ll have to collect a lot of souls because the good abilities/weapons don’t come cheap. 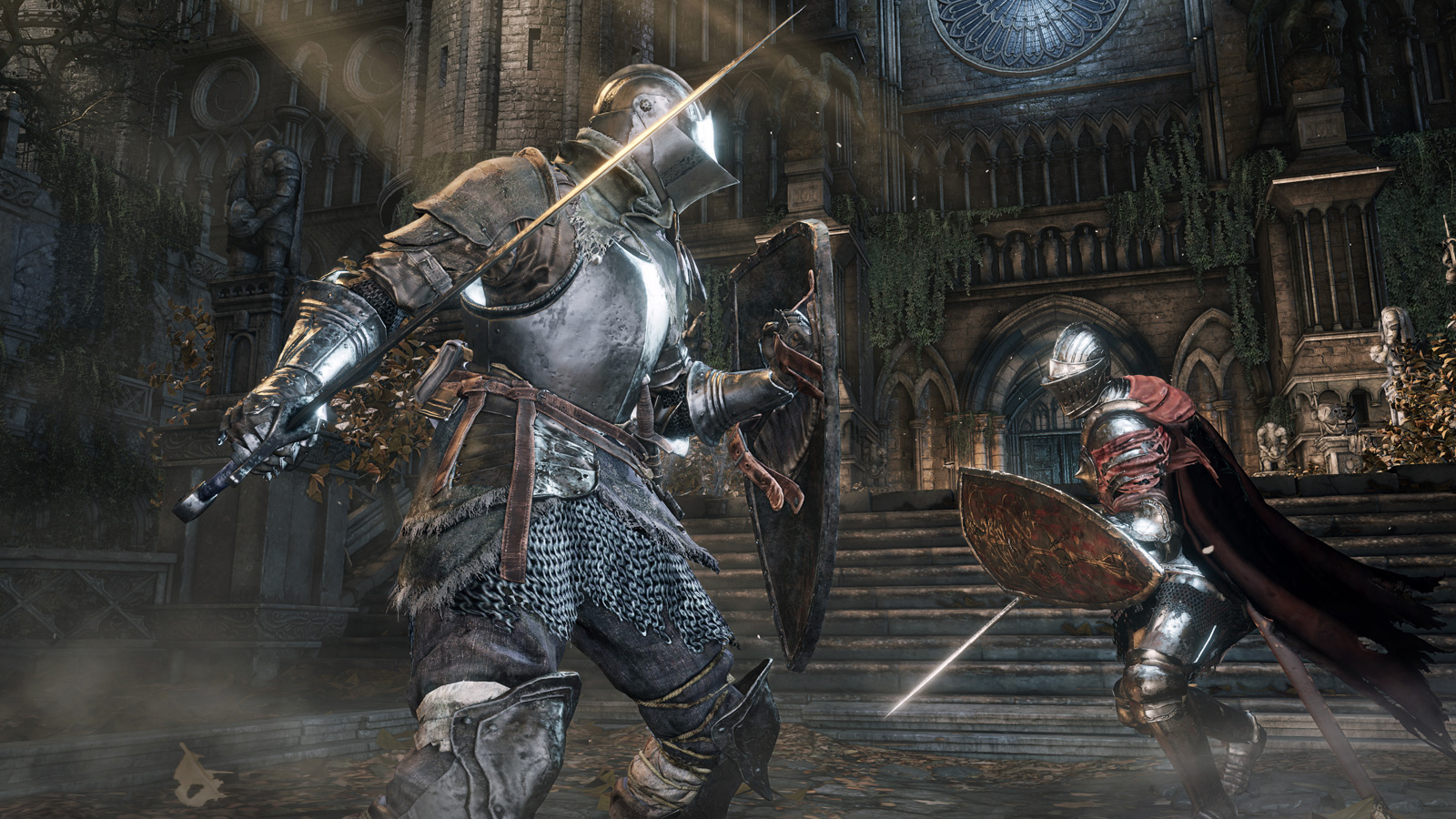 Weapons wear down over time and will break but all you need to do is heal/rest at a bonfire or bring the weapon back to the blacksmith. The bonfire is similar to a Pokémon Center, where it’s free to use and you can travel between locations and store things at them. Another comparison to a Nintendo product I can make is the stamina meter which is very similar to how the stamina works in Legend of Zelda: Skyward Sword. Attacks and running for example run the stamina meter down and it takes a moment to replenish but that few seconds could be enough to kill you!

Strategy is key in how you attack certain monsters and how you replenish health. You can use items to heal but the best way to heal your HP is at a bonfire. One major word of caution is after you use the bonfire to heal, all the main level monsters, not the boss/mini boss monsters, will respawn and need to be killed again. It gives you a good way to gain more soul EXP but it means you might have to replay a really tough part of the level again. Trust me, if you needed to heal after a certain part of the level, it’s pretty tough and you won’t fee; like playing it again.

Now, with every good game there are highlights as well as some lowlights. Dark Souls III does have some negatives that need to be addressed. For starters, the controls/camera controls are not the greatest. For a game that relies on precise attack command and stealth, having the camera controlled by the right control stick wasn’t that smart of an idea. Since there aren’t any “C” buttons like on an old N64 controller, the right stick was one of the few options but it seems like a more steady camera would have added to the gameplay. I found the camera going in all directions at times when I was trying to see if there were any monsters in the area or when I was going down a ladder.

It also felt like the controls were slightly over complicated for their own good. I found myself pressing the wrong buttons at times because every button was assigned a command when it didn’t need to have one.

I also found myself switching weapons and using items when I didn’t want to so be careful! You can still be attack while using items and if you don’t use it in time that could be the difference in life and death so keep on guard for low HP. This comes into play in boss battles but it could play in factor in surviving as well! There were times during the boss fights that I would use an item and then the boss would kill me while I’m using said item so be on guard during boss fights.

Make sure the enemies are dead before you start moving to another location, I can express that enough. There were quite a few times where I thought an enemy was defeated but it needed one more hit and it attacked me again. When you’re trying to get through an area before a boss fight without losing health and stuff like this happens, it can aggravate the hell out of you. Also, losing health by jumping from a high location is a pain as well. You don’t lose health from this every time but it only differs from the spots that aren’t too high. The really high up areas will kill you if you jump from them.

These reasons make Dark Souls III an even tougher game than it already is and it’s also these reason that I’m giving the game an 8/10.

I would like to thank Bandai Namco for the review copy.