Last Gadget Standing and Mobile Apps Showdown drew a packed house, big-hearted applause and a ton of laughs at 2013 International CES. At the end of it all, Living in Digital Times named Lenovo IdeaCentre Horizon, a 27 inch all-in-one “table PC,” and Luminae Keyboard+, a stylish, modern, light-driven fully customizable keyboard developed by young Kickstarter company TransluSense, as the Last Gadget winners. Lenovo captured the online vote and TransluSense edged out the Misfit Shine (Misfit Wearables) for the win at the live event. MyScript Calculator by Vision Objects, a free mobile calculator (iOS, Android) that understands handwriting, took the prize for both the online vote and the live showdown, a first in the history of the Mobile Apps Showdown. 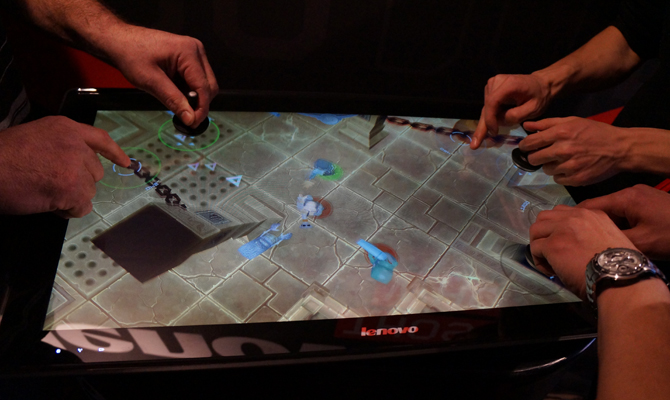 Keeping the crowd going were event hosts Jon Hein and Gary “Baba Booey” Dell'Abate, co-hosts of The Wrap Up Show on the Howard Stern channels on SiriusXM Radio, who brought their inimitable wit and knowledge of all things geek to the festivities. Attendees were treated to presentations complete with Las Vegas showgirls, Jay Leno and Elvis impersonators, a human-size “swipe” foam finger, a virtual dating show, push-up and sit-up competitions, and even a couple of presenters who started out in evening attire and stripped down to bathing suits while digitally monitoring their vitals.

“It was a standing-room-only crowd who loved having their voice heard as the arbiters of good products,” said Robin Raskin, founder, Living in Digital Times and event emcee. “The events showcased an extraordinary diverse group of gadgets and apps, and those that made it to our top 10 lists are sure to find success in the marketplace.”

So, how does a product make it to last gadget? How does an app become more than just a statistic and go on to win the showdown? Last Gadget Standing looks for devices (not a service or software) that are pioneering the ways in which the digital world will change, while Mobile Apps Showdown honors the best smartphone and tablet apps across all platforms.

Eligible products and apps were submitted in early December of 2012, and from there, two panels of esteemed judges, tech experts ranging from longtime journalists to investment strategists, to analysts and product reviewers, had the arduous task of selecting the Top 25 semi-finalists for each competition.Judges chose products based on their “sustainability” to make it to the top of the heap.From there, heated discussions ensued and the lists were narrowed down further to the Top 10 gadgets and Top 10 apps that would face the people’s vote online and live at CES. Winners of online voting were determined by popular vote, and in person, an applause-o-meter measured audience enthusiasm to determine the winner.