NVIDIA has worked closely with the development team behind Flatout Stuntman to super-charge the mobile experience on Tegra 3 devices. The newest version of the bestselling arcade racing franchise puts the focus on the crash test dummy. Ronnie Nelis, CEO, Team6 Games, explains what’s in store for gamers who get behind the wheel of Flatout Stuntman in this exclusive interview. 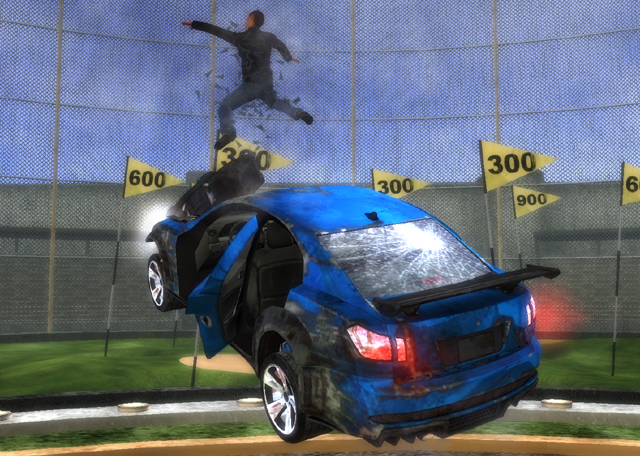 Can you talk about how you've worked with NVIDIA on this game?

Nvidia contacted us because they were highly interested in our concept, capabilities and technology. Together we came up with the concept of Flatout Stuntman for tablets, because it's short, addictive and fun gameplay is exactly what you need on a platform like this. During the development NVIDIA's project manager evaluated the project and gave us feedback on the game experience in general and for Tegra 3 specific.

Flatout Stuntman makes use of the latest Tegra technology by making use of advanced shaders and techniques, as well as rendering large amount of detail/polygons while maintaining a surprisingly good performance. One example of these complex shaders is the road: The road exists of a high resolution color/diffuse map as a base, a normal map for realism and make it a real part of the world, a dirt map to give it that authentic look, and a combined specular/reflection map to finish it off. An example of a less man-made surface than asphalt is the muddy ground: Only on Tegra3 we were able to fill everything with foliage so all fields of grass and flowers look so soft and realistic.

How does this impact the gameplay experience?

For all devices using Tegra 3 hardware, we, as a developer, know for sure that Flatout Stuntman will run smoothly and without problems. The Android market in general is a widely scattered market with hundreds, thousands of different hardware combinations, capabilities and specifications. For a developer, it's near impossible to test on thousands of unique devices and many visual artifacts, bugs or not even being able to run the game are problems that can be expected. Therefore, Tegra 3 is exactly what the Android market needs: It's a beacon of light, it makes the most important difference for developers, it is the future.