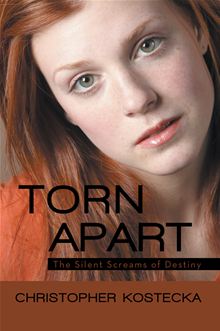 From Harry Potter to The Hunger Games, coming of age tales are constantly at the forefront of modern young adult entertainment. The story of the awkward, floundering protagonist, searching for meaning in the crazy world they live in, has become somewhat of a pop culture mainstay of today.

But the newest tale by Christopher Kostecka is anything but ordinary.

Supernatural forces and modern technology collide in Torn Apart, the story of a young boy who is gifted supernatural abilities that force him to come out of his shell and discover his true potential. A tale of adventure, self-discovery and the power of true love, Kostecka takes readers along on an exhilarating journey as one boy encounters his true destiny.

Contrary to the popular belief that video games have a negative impact on a child’s emotional and physical health, Kostecka positions video games as having a positive influence, helping to build the self-esteem and confidence of the book’s adolescent main character.

Kostecka has firsthand experience with coming out of his shell. The parent of a child with ADHD, Kostecka initially developed the idea for the book when telling his son a bedtime story one evening. The story was added onto each night and eventually written down as a complete novel. The experience was not only a bonding experience for Kostecka and his son, but also a chance for his son to use his imagination to create something new.