The fifth annual Big Buck World Championship closed with a bang tonight, with two Minnesotans going head to head. In the end, it was underdog Chris Fream, of Minneapolis, who beat out reigning champion Nick Robbins in the final round. With the win, Fream takes home Pappy’s Jug trophy and a $15,000 top prize. Returning women’s champion Sara Erlandson of Beldenville, Wisc., took the top prize again in the second annual Ladies Tournament.

Losing early to Robbins in the quarterfinals of the double-elimination tournament, Fream had to defeat Robbins in two Big Buck adventures in the finals. Nearly 100 of the best Big Buck players from around the country and Australia gathered at the Altman Building in New York to compete for more than $50,000 in prize money. 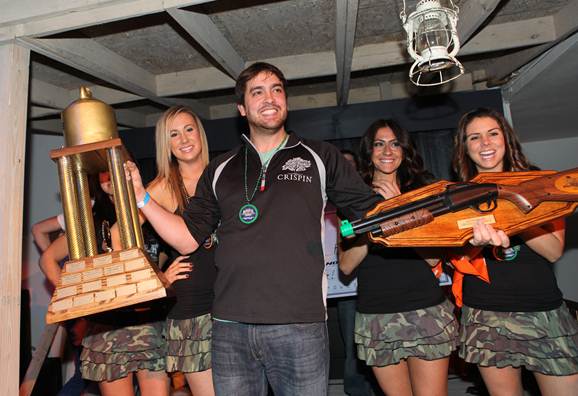 Fream, 29, spent the past year training for the World Championship and snuck up on the competition with his sharp shooting. A sales manager for Crispin Cider Company in the Minneapolis area, Fream placed second at the World Championship in 2010, but was unable to participate in the 2011 tournament. He came back with a vengeance, taking home $15,000.