NetherRealm Studios Brings The Fight To DC Super Heroes With Injustice: Gods Among Us

NetherRealm Studios has been working with Epic Games’ Unreal Engine 3 technology since it was part of Midway Entertainment. The Chicago-based studio has focused on fighting games, establishing itself with the bestselling Mortal Kombat franchise. After exploring a hit crossover a few years ago with Mortal Kombat vs DC Universe, the Warner Bros. Interactive Entertainment-owned developer has returned to comic book lore with the original fighter, Injustice: Gods Among Us. The game, which features iconic super heroes like the Dark Knight, the Man of Steel, Wonder Woman and Catwoman, was designed using Unreal technology. 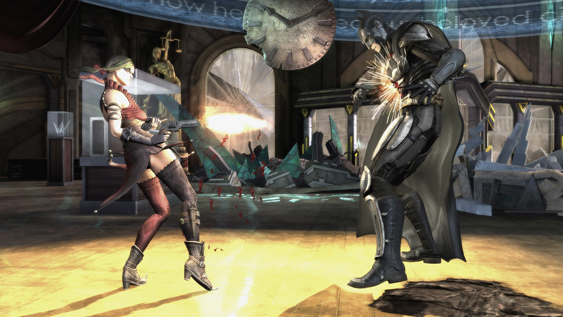 “We’re always making advancements to our version of the Unreal Engine 3 graphics engine,” said Ed Boon, creative director, NetherRealm Studios. “This game has much more dynamic lights in terms of lighting the environments and the characters. It showcases a lot more detail than what we had going in the last Mortal Kombat game. In addition, we have a faster rendering engine, so we can put more out on the screen than 60 frames per second. We have a great memory manager that lets us have multiple arenas for any fight, so you can knock someone from one arena into the next. Injustice is reaping the benefits from all of these steps forward that we took since Mortal Kombat.

Unreal was never known as a fighting engine before the team at Midway chose the technology as part of a company-wide focus to allow its teams to focus on content rather than designing new graphics technology. NetherRealm has stuck with Epic’s engine all of this time.

“ Unreal has traditionally been an engine that’s more for first-person shooters, rather than games like Mortal Kombat and Injustice games, which feature big characters that rely on heavy motion-capture animation running at 60 frames a second,” said Boon. “These gamers are a completely different animal.  So we made modifications to Unreal to optimize the engine for running on this type of game. Our guys put a good amount of work into making the tech more optimal for a fighter.

Although the studio originally started with Matinee, they have built onto Epic’s popular tool with modifications that the cinema department had specifically asked for. The tool is now called the Cinema tool internally, but at its core is what Matinee started with. Boon said that Kismet has also been heavily modified by his team, although the original tech is still used in small amounts.