Trion Worlds has partnered with Namco Bandai Games to distribute the massive open world shooter Defiance in Europe, the Middle-East, South Africa, Australia and New Zealand. The game will launch in April for Xbox 360, PlayStation 3 and PC. There will also be a Syfy TV series set in the same universe. Check out the video from the set in Toronto below.

Defiance is an immersive online open-world shooter for console and PC set in a future shattered Earth. A revolutionary transmedia experience, the game will launch alongside the original Syfy TV show Defiance, with events from each impacting the other’s evolution. The game combines the intense action of a console third-person shooter, with the persistence, scale, and customization of an MMO, while its TV counterpart exudes the scope, story, and drama of a classic sci-fi epic.

“We’re delighted to be working with Namco Bandai, a great company with a proven track record in bringing big games successfully to the market thanks to their great distribution network and excellent relationship with both high-street and online retailers,” said John Burns, SVP and GM Trion Worlds Europe.

“We are really looking forward to collaborate with Trion Worlds, a very dynamic company which develops high-quality and successful massively social games, on such an ambitious and exciting project which is Defiance” added Olivier Comte, Senior Vice-President at Namco Bandai Games Europe. 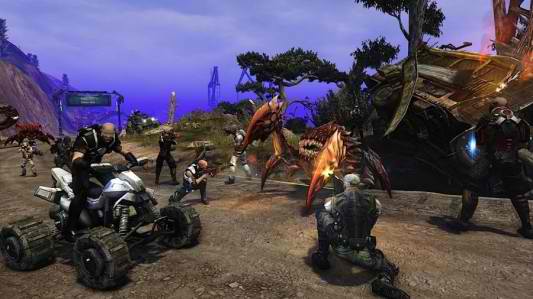