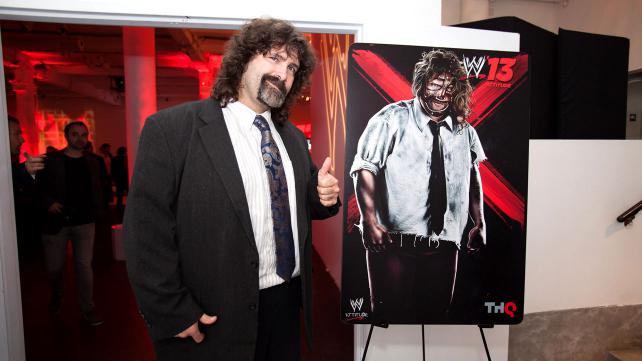 That time period from 1996 through 2001, dubbed “the attitude era” for the exploits of Foley, along with new wrestlers like Dwayne “The Rock” Johnson, “Stone Cold” Steve Austin, Shawn Michaels and Triple H; is the focal point for THQ’s WWE 13 video game. Foley, who recently returned to WWE, is one of the central wrestlers in the new game’s campaign mode. In fact, all three of his characters are featured in the game, which is available Oct. 30 for Xbox 360, PlayStation 3 and Wii.

These days, the tolls of the damage Foley did to his body for the sake of entertainment in and out of the ring are extremely visible. He can’t stand for more than a short period of time and he walks slightly hunched over with a limp. But the moment he starts talking, it’s pure entertainment. Foley isn’t shy. The New York Times bestselling author, who has penned three autobiographies, two novels and four children’s books, says exactly what’s on his mind. The WWE Legend talks about his career and explains why your kids should be reading his new Christmas story in this exclusive interview.

What do you think about how THQ made you look in the new WWE 13 game?

Man, I look good. The musculature is not exaggerated. They slim me down just enough to where I still look dangerous. I love it. When I saw the graphics four or five months ago, I was floored by…not literally floored, I didn’t drop to the floor, but I was very impressed by how good it looked. As the game progressed, and I realized that I was a bigger and bigger part of it, I became more and more excited.

What was it like going back in and doing the voice work and reliving some of those key matches from the Attitude Era?

It was one of the most fun things I’ve done. There’s a great moment…I’m pleased that they’re going with great moments, and not just great matches, because sometimes those get excluded. For example, I get to recreate the night that Cactus Jack made his WWE debut at Madison Square Garden in 1997 by way of an interview that Dude Love did with Mankind. People were like, “Dude Love/Mankind? They’re the same guy.”

There’s a green screen, a lot of patience, a great director, and when we went on the air at the Garden, it looked to people there that Dude Love was interviewing Mankind to introduce Cactus Jack; it was just great. Then Cactus Jack went and tore down with Triple H at the Garden. Fifteen years after the fact to be able to recreate that was very fun and gratifying.