Trion Worlds, publisher and developer of the online open world shooter, Defiance, will launch globally on April 2. A one-of-a-kind transmedia experience, players and fans can experience Defiance on PlayStation 3, Xbox 360 and Windows PC and become part of the online world ahead of the April 15 debut of the Syfy TV show. Grant Bowler talks about the convergence between the game and TV show in the exclusive video below from the set.

“In terms of ambition and scope, Defiance’s transmedia features make it unlike any other entertainment experience,” said Nathan Richardsson, Trion’s VP of Development and Defiance Executive Producer. “After five years of development, it brings great pride to the Trion and Syfy teams seeing Defiance come to fruition.”

For those who cannot wait until April 2 to get a look into life as an Ark Hunter in Defiance, Trion released the full version of their highly-anticipated Defiance live action game trailer titled Join the Fight. Set in the arid desert, this trailer combines the isolated, post-apocalyptic setting of Defiance with futuristic EGO technology and a Hellbug attack. This live action trailer gives further insight into the lives behind the Ark Hunters in Defiance, and how there is never a safe moment on this new, terraformed Earth. 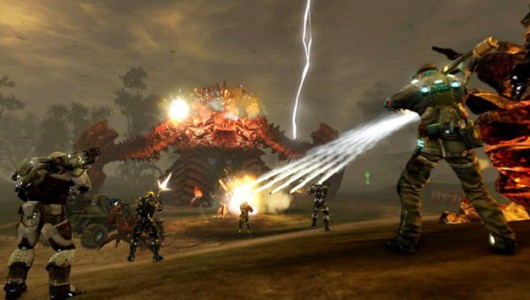