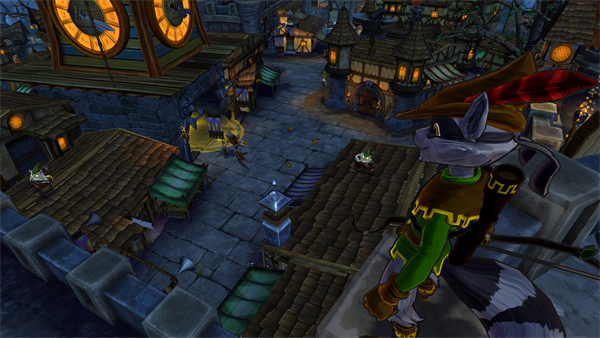 In this new adventure, the gang tears through space and time to restore the legacy of the Cooper Clan through a variety of gameplay including open world exploration, new stealth and combat moves, action-packed missions, collectible costumes and treasures, interactive puzzles, and epic boss bottles. Chronicling where Sly 3: Honor Among Thieves concluded, Sly carries on with a case of alleged amnesia and dances off with gal pal Carmelita, leaving Bentley as the keeper of the treasured Thievius Raccoonus -- the Cooper family's ancient book of master thievery. When the pages start disappearing, the gang must help save the Cooper Clan legacy from being destroyed forever by traveling back in time to meet Sly's most famous ancestors. With a full cast of playable characters, players will visit majestic and exotic locations such as Feudal Japan, Medieval England and Ancient Arabia in order to solve the mystery.

"Capturing a wide fan base when it debuted on PlayStation 2 over 10 years ago, Sly Cooper is one of PlayStation's most storied franchises, and today we mark the next evolution of the series with the release of Sly Cooper: Thieves in Time," said Guy Longworth, Senior Vice President, PlayStation Brand Marketing, SCEA. "Playable on PS3 and PS Vita for the first time, gamers will now get to experience the beloved franchise at home or on the go, and in a whole new way through richer graphics, more immersive gameplay and seamless connectivity between the two devices."