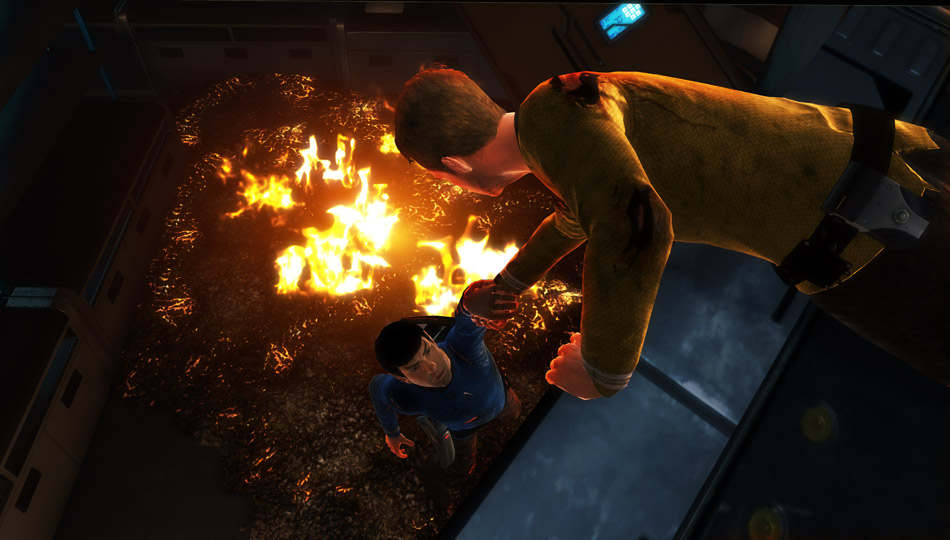 For more than four decades, the U.S.S. Enterprise has been a majestic icon of adventure and excitement.  On board, her crew explores strange new worlds, seeks out new civilizations… But what fans have known of the iconic starship has largely been limited to what is seen in movies and on television. That will change on April 23 when Star Trek The Video Game gives players a deeper and much more interactive look inside the U.S.S. Enterprise.

“One of the great joys of video games is the opportunity to take audiences to places that are only hinted at in traditional film and TV projects,” said Brian Miller, senior vice president of Paramount Pictures and executive producer of Star Trek The Video Game. “Giving gamers the opportunity to explore the U.S.S. Enterprise is one of the more exciting aspects of our video game and one that we can’t wait to share with Star Trek fans and gamers worldwide.”

Playing as Kirk and Spock, gamers must face-off against the villainous Gorn – the formidable enemy first introduced in the classic 1967 Star Trek television episode “Arena.” Their battles will take them into familiar locations, like the bridge, transporter room and the engine room – but also deep into many areas of the ship that have never been seen on film before, including the Enterprise’s turbolift shafts, observation lounge, engineering decks and officer’s quarters.

Showing off The Amazing Eternals and others.

Warframe Steps Into The Open With Plains Of Eidolon Expansion