In Call of Duty: Black Ops II, the actor worked in full performance capture gear with other actors to bring the epic campaign story to life. The stuntman-turned actor returns to Black Ops as a much older Sergeant Frank Woods. James C Burns talks about the creative process that Treyarch put him through in this exclusive interview. 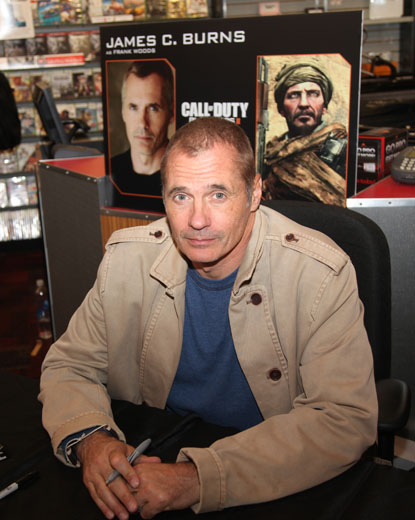 What do you think it is about Call of Duty that’s attracting such recognizable actors to the franchise?

Money. Oh, I mean obviously it’s a great job. I’m not being too facetious. I mean work is work as an actor and pretty much take a lot of jobs because you’ve got to pay the rent. To have an opportunity to be in a job like this where you get to play with these great characters, I mean all the characters are fun.  They’re really interesting. As an actor, you want to be in an environment where you can stretch your legs. You get to revive yourself in complex characters that get to just say cool sh*t, get to throw a punch and blow stuff up. That’s a fun day. Playing army for a living, it’s a fun day at the office.

What was the performance capture experience like for you at House of Moves?

That actually was how I got the job as Woods. They were casting for a stunt guy who had weapons training and acting abilities. I had done a character very similar to Woods in a film and long story short, they brought me in to help them develop the performance capture technique. For the first three months, my association with Treyarch was spent playing the role of Frank Woods and that was just to show Activision that this new technology, this new idea of capturing face, voice and body all at once just like a film, was possible. I was their Woods, and then when it came time to cast the game, they decided to just keep the guy they had. I wasn’t actually auditioning for Call of Duty, I was just helping them out developing performance capture.