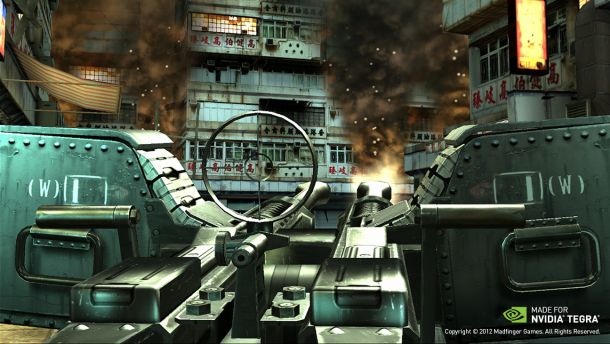 Madfinger Games created an exclusive demo of its upcoming shooter, Dead Trigger II, for the NVIDIA Project SHIELD portable gaming device. The demo, which was on hand at the NVIDIA CES booth, featured a battle with a giant zombie that’s taller than the beautifully detailed shops that line the street. There was plenty of shooting in the short demo, which also included a collection of more traditionally-sized zombies attacking from all sides. The level of detail in this game, which featured a turret that took down the hulking boss, is straight out of a console title. Marek Rabas, CEO and programmer at Madfinger Games, talks about how NVIDIA Tegra 4 made this game possible in this exclusive interview.

How have you worked with NVIDIA on Dead Trigger II?

Mainly we are happy that it’s very fast, so we can use the more complicated shaders and create characters with more polygons. This is what we are using, the vast power of the GPU and CPU.

How does this impact the game play experience across the platforms you’re targeting?

I hope it will not impact the gameplay in any way because it’s more about the visual look and we don’t want to have different gameplay on the different platforms.

What are the challenges in developing for Android devices today?

It’s always the same. It’s about the fragmentation. Once you’ve created a game, you have to make it run on as many possible devices. So you have spend all this time with this. That’s the big issue with Android.