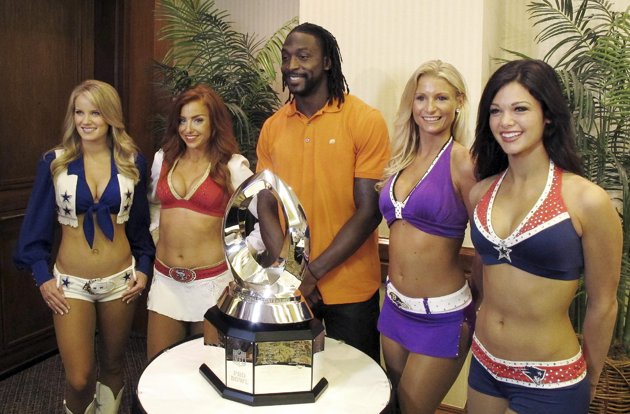 The NFL awarded Chicago Bears cornerback Charles Tillman with the Salute to Service Award presented by USAA, the League’s Official Military Appreciation Sponsor. The award was created to acknowledge the exceptional efforts by members of the NFL community to honor and support U.S. service members and veterans. Tillman was able to take a timeout from the festivities to talk some Madden NFL video games in this exclusive video interview.

Tillman accepted the award at the 2nd Annual NFL Honors award ceremony and gala in New Orleans and as part of the award, USAA will contribute $25,000 in Tillman’s honor to the aid societies representing all five military branches.

"The military has played an influential part in my life,” said Tillman. “Throughout my dad's 20 years of service, he learned about teamwork, leadership and commitment, and he taught me those same values.  I'm thankful not only for what the military has done for me, but for what the members of our military sacrifice for this country.  I appreciate the men and women of the United States Army, Air Force, Marine Corp, Navy and Coast Guard for protecting our homeland.  The next time you pass a soldier, sailor, marine or airman on the street, kindly walk up to them and say, 'Thank you for your time and service.'  I am honored to be the recipient of the 2012 Salute to Service Award."

Familiarity and respect for the military community came to Tillman quickly in his early years. His father, retired Army Sgt. Donald Tillman Jr., served 20 years, and his childhood experience sparked the cornerback’s desire to give back to the men and women who serve our country—an ongoing effort that sees him continuing to engage with service members, veterans and their families throughout his 10 year NFL career.

The next thing for Link to conquer is the New England Patriots. He can do it!