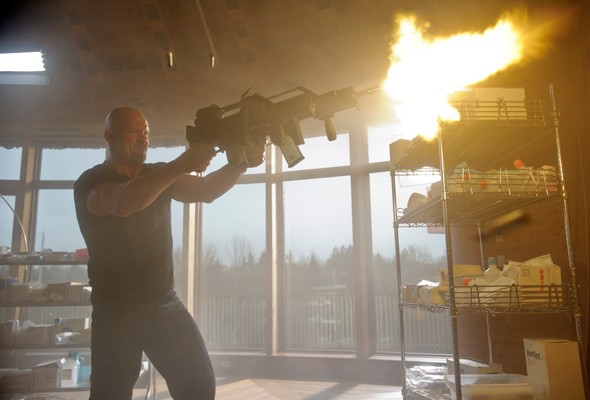 Unrelenting action is the order of the day when superstars Steve Austin (The Expendables, Maximum Conviction) and Dolph Lundgren (The Expendables II, One In The Chamber) burn up the screen in Anchor Bay Films’ bone-crunching action epic The Package, which is now out on Blu-ray and DVD. Austin talks about his transition from professional wrestling to Hollywood in this exclusive video interview.

Directed by Jesse V. Johnson and written by Derek Kolstad, The Package features Austin as Tommy Wick, a nightclub bouncer and enforcer for Seattle crime boss Big Doug (Eric Keenleyside, Dreamcatcher, Firewall). When Big Doug instructs Tommy to hand-deliver a secret package to the mysterious international crime lord “The German,” (Lundgren), he does so with the hopes that Big Doug will forgive the debt Tommy’s brother Eddie (Lochlyn Munroe, White Chicks, Freddy vs. Jason) owes.

Word of the clandestine delivery spreads and soon “the package” – and those who carry it – becomes the target of rival gang leader Anthony (Michael Daingerfield, The Messengers). Anthony will stop at nothing to ensure its capture. Facing incredible odds, Tommy races against the ticking clock – and a small army of hit men, mercenaries, assassins and sadists -- to complete delivery. But does The German have other ideas about what to do with the package?