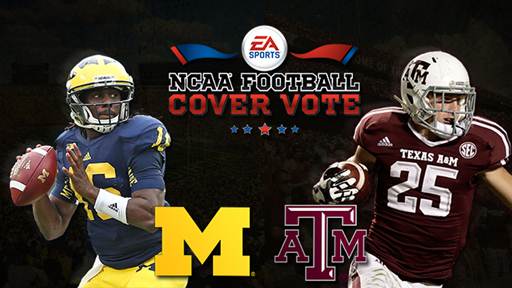 The NCAA Football Cover Vote has entered the final round, as Michigan’s Denard Robinson and Texas A&M’s Ryan Swope face-off for the opportunity to grace the cover of this year’s game. After six rounds and over 3.1M votes these two athletes remain as the last men standing in the quest for the cover.

Robinson and Swope jumped out to large early leads this round and never looked back. The duo continually battled for the lead throughout, with Robinson ultimately securing the most votes. Robinson has deployed the power of social media to fuel his campaign, while Aggie Nation has shown unprecedented support for Swope. To learn more about the storied traditions of Robinson and Swope’s alma maters, Michigan and Texas A&M, go to the EA SPORTS NCAA Football 14 Cover Vote YouTube playlist.

Final round voting has begun on the NCAA Football Facebook page, and will continue through March 8th. This is the last chance for fans to secure victory for their favored athlete, and vote totals have reset to zero so it’s anyone’s race.