Maxim Makes Gears Of War: Judgment DLC Free For All 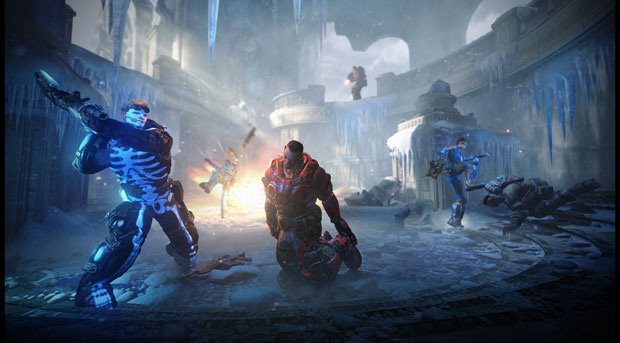 Microsoft, Epic Games and Maxim are delivering even more adrenaline-fueled action to Gears of War fans with the upcoming post-launch release of two free, sponsored multiplayer maps – Haven and Capitol – as well as Execution Mode for Gears of War: Judgment starting April 2. Epic talks about the new game in the exclusive video below.

In Execution mode, the objective of each team is to kill all members of the enemy team before the time limit runs out. The catch? Unless hit with a one-shot kill weapon like the Booshka, players go into a “Down But Not Out” state and will revive at the end of the bleed-out timer instead of dying. To finish the job, perform an Execution on a downed enemy.

There are two new maps available in this DLC. The first, Haven, is an ancient monastery in the Azura mountains that was once a tropical paradise, but is now a frozen wasteland. (It’s not global warming, but shifting tectonic plates.). This map has an asymmetrical circular layout where all paths lead back to the center. Epic promises this map will be especially great for Domination games. Recommended weapons for this map are the Torquebow, Boomshield, Boshka, Digger Launch and Breechshot.