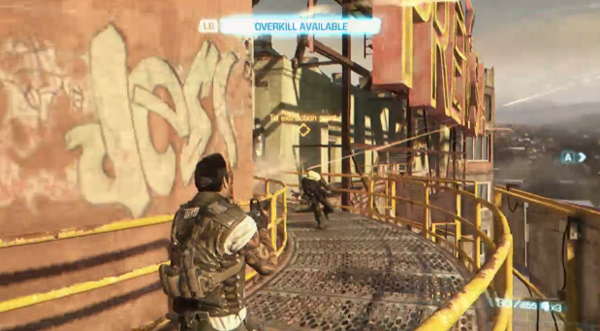 When the stakes are high, risk it all by going double or nothing. Electronic Arts launches a downloadable demo for Army of TWO The Devil’s Cartel, the next installment of the franchise celebrated for its dynamic two player co-operative gameplay and over-the-top blockbuster action, on Xbox LIVE  Marketplace and PlayStation Network starting on March 12. Game developer Greg Rizzer talks about the new shooter in the exclusive video interview below.

In the demo, players will step into the boots of private military contractors Alpha and Bravo as they embark on a mission to rescue a kidnapped politician while diffusing an additional hostage situation. From the bottom floor of a dangerous drug lab, to the rooftops of a sky rise, Alpha and Bravo must infiltrate the Cartel’s stronghold and overcome hordes of cartel members, all the while working together to survive. With the lives of others on the line, the dynamic duo will need to split up as one player runs into battle face-to-face with their opposition, while the other takes to the sky in a helicopter to man a mini gun and provide cover. Complete with epic explosions, massive destruction and the brand new Overkill feature, gamers will be able to experience the adrenaline and palm sweating action before the game launches on March 26.

Army of TWO The Devil’s Cartel Overkill Edition is still available to pre-order at participating retailers. Gamers who reserve their copy of the game will receive exclusive masks, outfits, a highly destructive co-op contract mission and deadly weapons, including the TAH-9. If customers pre-order their copy from GameStop, they will receive the Army of TWO The Devil’s Cartel Hit-Maker’s Kit, which will give gamers the chance to play as characters portrayed by music megastars Big Boi and B.o.B, along with an additional contract mission and custom designed gear.