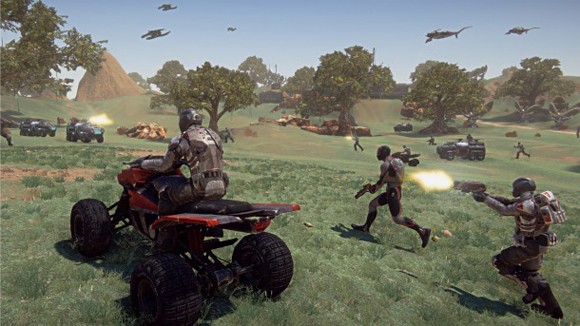 Bottomline Guild will give back to American troops at GamePocalypse 2013, a massive gaming event to support the Wounded Warrior Project. Spanning a variety of Massively Multiplayer Online (MMO) games including Rift, World of Warcraft, Guild Wars 2, and PlanetSide 2, gamers will be participating in events running for 24 hours, starting at midnight CST, March 16, 2013. All proceeds from the GamePocalypse 2013 event will go directly to charity, and GamePocalypse's organizers are hoping to raise $50,000 for US troops.

As part of the event, FleshEatingZipper will be donating prizes courtesy of Sony Online Entertainment. Rob Morris, FleshEatingZipper's senior talentless bum, is ecstatic for the event. "The chance for a bunch of gamers to give back to those who have fought for our safety and freedom was something we couldn't pass up,” he said, “Where's the sign-up sheet?"

Other GamePocalypse 2013 sponsors include Bossrigs.com, who will be raffling off a gaming PC, and Rounds Down Range. A large number of gaming guilds will also be participating in the event. "It [GamePocalypse 2013] represents two things that are dear to me: playing games and helping others that are in need. With GamePocalypse, I get to do both!" said Rycon, event coordinator for Bottomline Guild.

Bottomline is a gaming community which spans a number of games including Rift, World of Warcraft, Planetside 2 and Guild Wars 2.  In addition to their recent work with the Wounded Warrior Project, Bottomline also hold charity events to support Extra-Life, a charity which is aimed at helping children with serious diseases.

The mission of Wounded Warrior Project (WWP) is to honor and empower wounded warriors. WWP's purpose is to raise awareness and to enlist the public's aid for the needs of injured service members, to help injured servicemen and women aid and assist each other, and to provide unique, direct programs and services to meet their needs. WWP is a national, nonpartisan organization headquartered in Jacksonville, Florida. To get involved and learn more, visit woundedwarriorproject.org.

Participating guilds are as follows: