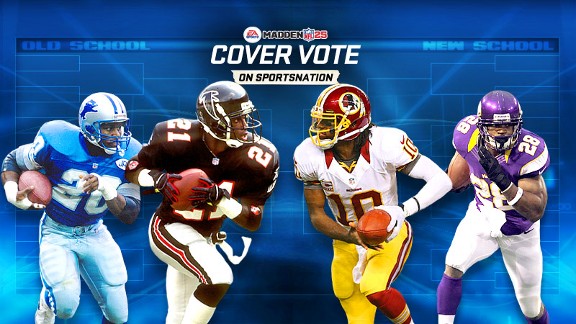 ESPN SportsNation has seen an unprecedented first round results and second round matchups for the Madden NFL 25 Cover Vote. First round vote totals reveal early front runners from both the new school and old school player brackets. Fans have shown up at the polls in record numbers casting over 21 million first round votes, shattering last year’s week one tally and already besting last year’s vote total for the entire Madden NFL 13 Cover Vote.

New school stud Adrian Peterson and old school legend Barry Sanders have proven to be just as electric off the field as on it, easily winning their first round matchups. Sanders secured the largest margin of victory of any of the first round matchups claiming 95% of the overall vote against Bears legend Ron Rivera, while Peterson claimed 94% in his victory over Carson Palmer.

Elsewhere in the brackets the 49ers are showing their dominance, with top seeds Joe Montana, Jerry Rice and Colin Kaepernick all easily dispatching their opponents. In a surprising turn of events, No. 11 Darrelle Revis managed to knock off No. 6 Jamaal Charles in his quest to be the face for the new school.