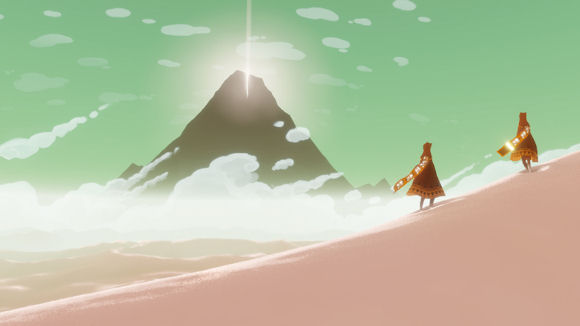 The downloadable PlayStation Network title Journey received universal acclaim throughout 2012, and is a high point in a developer journey that started with IGF Student Showcase-nominated title Cloud in 2005, and spanned acclaimed titles fl0w and Flower.

Journey takes players on a trek towards a mysterious mountain across a desert, with wordless gameplay and serene natural visuals. Players can randomly encounter other travelers on the way to the temple, allowing them to share their voyage together, with a unique and touching experience changing on every playthrough.

Arkane Studios’ fantastical stealth adventure game, Dishonored, won the inaugural Game Developers Choice Awards Audience Award category, after thousands of votes were cast. The critically lauded Dishonored shares the story of a magic wielding assassin clearing his name for a murder he did not commit. The narrative commitment to multiple paths and player choice endeared itself to many game players in 2012.

Elsewhere, strategic space adventure FTL: Faster than Light won Best Debut at tonight’s ceremony. Developed by a two-man core team at Subset Games, the title began as a Kickstarter project and IGF China honoree prior to winning in categories at both the Game Developers Choice Awards and the Independent Games Festival tonight.