My Type Of Countdown: Top 5 Easter Bunnies Of Gaming

Easter is this weekend and to everyone celebrating, like myself, I wish you all a happy and healthy Easter holiday. For those of you who aren’t allow me to present you with the next best thing, the next “My Type of Countdown,” the top 5 Easter bunnies of gaming. The Easter Bunny is so popular that he can team up with Santa Claus and hang out with Snoopy. Now all he needs to do is party with Spuds MacKenzie and then I’m certain he has better connections than I do. I’m still on the fence on that one but I’ve gotten way off topic. This countdown will have some of the more memorable characters and some of the lesser known characters. Let’s “hop” to it. I have no control over those, they just happen from time to time. There might be more, there might not be. Strap in, it’s going to be a fun ride. 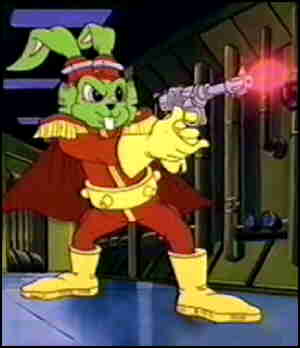 We begin our countdown with a Green Rabbit from the old NES days, Bucky O' Hare. Long story short, Bucky and his crew are trying to save the Aniverse against the opposing forces of the Toad. His crew gets kidnapped by the Toads and it’s up to the fearless Captain Bucky to save the day and rescue his loyal crew. The game plays pretty straight forward as old school NES platformers go. Bucky has the ability to charge up his jump to let him jump higher than usual. Being able to jump/hop is something a rabbit has to be able to do.

Each time you rescue a crew member, you can play as them throughout the journey to stop the Toads from taking over the Aniverse. The music reminds me so much of the Ninja Turtles games for the NES. The Turtles had a rabbit friend as well, Usagi Yojimbo, rabbit samurai from an alternate dimension. So, a rabbit that has a loyal crew for his space ship, trying to prevent a universe from being taken over and has the ability to jump higher if needed. Number 5- Bucky O’ Hare